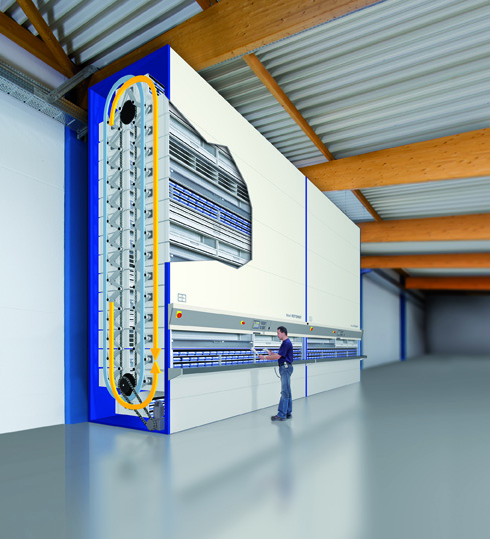 Formed in December 2006, United Launch Alliance is a 50-50 joint venture owned by Lockheed Martin and The Boeing Company. ULA brings together two of the launch industry’s most experienced and successful teams – Atlas and Delta – to provide reliable, cost-efficient space launch services for the U.S. government.

Manufacturing, assembly and integration operations are carried out at their state-of-the-art production facility in Decatur, Alabama. In addition to the main facility where the massive rockets are assembled, ULA has nearby warehouse facilities that feed parts and supplies to the assembly process.

United Launch Alliance was storing all of their inventory on standard pallet racks, which were not ideal for the thousands of smaller components kept in inventory. ULA contacted their local Business Systems and Consultants (BSC) of Birmingham, Alabama to help them become more organized, save space and be more productive when processing larger orders.

BSC recommended the Rotomat Vertical Storage Carousel from Hanel Storage Systems. The Rotomat would allow ULA to take advantage of their full ceiling height, storing more inventory in a much smaller footprint. Since the inventory was consistent over time and most items were of a uniform size and shape, it was an ideal application for a vertical carousel.

Rotomats could also be equipped with a variety of shelves, drawers, bins and dividers to accommodate a wide range of inventory items. Some items would be stored in their original packaging, while others would be placed into bins for easier access. United Launch Alliance began with a bank of 4 Rotomat Vertical Storage Carousels.

Using Hanel’s advanced, microprocessor-based controllers allowed the units to be seamlessly integrated into their existing warehouse management system (WMS). Orders can be efficiently processed across multiple machines for maximum productivity and time savings.

The success of the initial units convinced ULA to later expand with two additional Rotomat units.

Business Systems & Consultants can help you find the perfect storage solution, regardless of your industry.
Contact Us Today!